Save your spot at our Changemaker Showcase here! | July 14, 12 PM PT 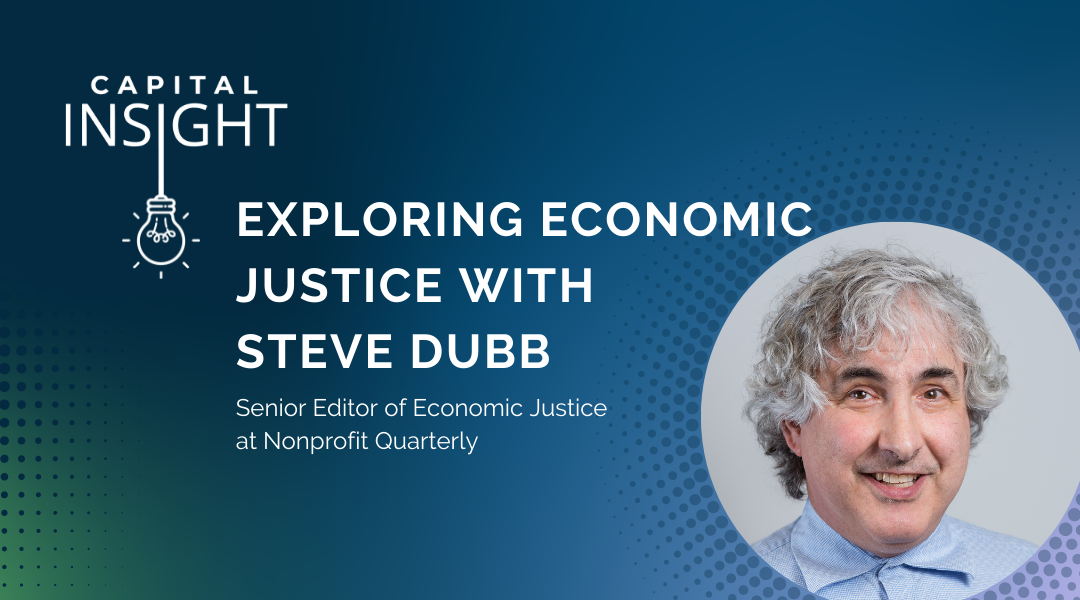 On this episode of the Capital Insight podcast, hosts Jenny Kassan and Michelle Thimesch are joined by Steve Dubb, a senior editor of economic justice at Nonprofit Quarterly (NPQ), to explore what it takes to build an economy that works for people and the planet.
Steve observes that in recent years the United States has moved backward in terms of economic justice — the levels of wealth inequality and wage inequality have risen while conditions of work and autonomy at the job have gone down.
He credits short-termism as part of the reason for this backward trend but believes that the main reason is a massive shift in power: “It used to be that $1 million a year was considered a good CEO salary in the United States. Now if you’re not making $10 million, you’re doing something wrong. That’s a major shift.”
New models for investing are working to address issues of economic injustice. Steve outlines two examples, as well as his vision for a “solidarity economy.” Listen below for the full conversation.

Steve Dubb is a senior editor of economic justice at NPQ, where he writes and edits for Nonprofit Quarterly (including his Economy Remix column) and curates a monthly webinar series, Remaking the Economy. Throughout his career with cooperatives and nonprofits, Steve has authored, co-authored, and edited numerous reports; participated in and facilitated learning cohorts; designed community building strategies; and helped build the field of community wealth building. Steve is the lead author of Building Wealth: The Asset-Based Approach to Solving Social and Economic Problems and coauthor of The Road Half Traveled: University Engagement at a Crossroads. In 2016, Steve curated and authored Conversations on Community Wealth Building, a collection of interviews of community builders that Steve had conducted over the previous decade.

Subscribe to the Capital Insight podcast on your favorite streaming platform!

Catch up on our latest episodes!

The Capital Insight podcast intro and outro is voiced by Marina Verlaine. She can be contacted at reel.peach.vo@gmail.com