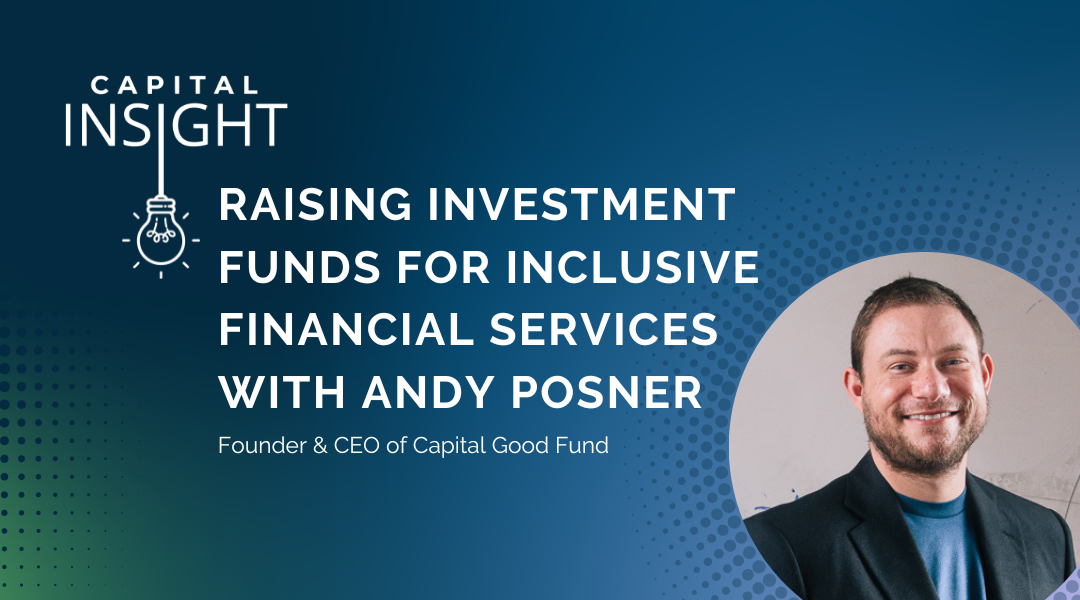 In this episode of the Capital Insight Podcast, hosts Jenny and Michelle chat with Andy Posner, Founder and CEO of the nonprofit Capital Good Fund. The fund’s mission is to create pathways out of poverty and advance a green economy through inclusive financial services.

Andy launched Capital Good Fund (CGF) in 2009 to combat predatory lending and the climate crisis by providing more equitable lending options to underserved communities. In this episode, Andy shares his journey developing CGF, CGF’s inclusive consumer lending programs, and how he raised millions of dollars from investors to fund this amazing work.

14 years after its founding, CGF now operates in 10 states. “We’ve lent out over $26 million to almost 11,000 families with a 97% repayment rate. And we’re growing really quickly,” says Andy. Listen to the episode to learn more.

Andy Posner founded Capital Good Fund in February of 2009 while earning his Master of Arts in Environmental Studies from Brown University. After reading Banker to the Poor by 2006 Nobel Peace Prize winner Dr. Muhammad Yunus, also known as the “Father of Microfinance,” Andy quickly recognized that equitable financial services could unlock the potential for underserved communities just as they could for clean energy technologies. As the financial crisis of 2008 began to unravel the economy and devastate low-income communities, Andy decided to take action. He launched Capital Good Fund with an eye toward using financial services to tackle endemic poverty—first in Rhode Island, and then nationwide.

Andy firmly adheres to Dr. Yunus’ dream to put poverty into museums; or, as Andy says, put poverty out of business. He is the former Treasurer of the national Board of Directors of the Credit Builders Alliance, and a member of the Board of the Community Reinvestment Fund—one of the largest nonprofit lenders in America.

Andy has published his ideas in Huffington Post, Stanford Social Innovation Review, Chronicle of Philanthropy, his own newsletter (Be The Change), and nearly a dozen poetry journals. He was also selected as a 2011 Hitachi Yoshiyama Young Entrepreneur and a 2013 American Express Emerging Innovator (one of 45 globally), and a 2015 Rhode Island Foundation Nonprofit CEO Fellow. Andy was nominated for the 2019 Pushcart Poetry Prize for his piece, The Machinery of the State.

Subscribe to the Capital Insight podcast on your favorite streaming platform!

Catch up on our latest episodes!

The Capital Insight podcast intro and outro is voiced by Marina Verlaine. She can be contacted at reel.peach.vo@gmail.com