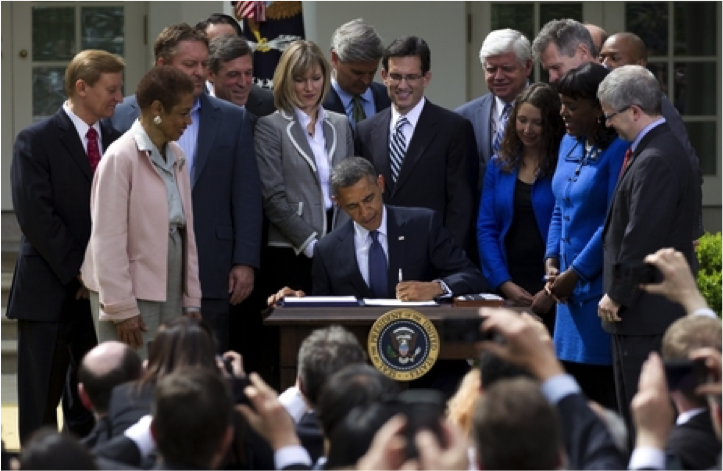 The Securities and Exchange Commission has finally released the rules for the crowdfunding exemption of the 2012 Jumpstart Our Business Startups (JOBS) Act.

My involvement with what ultimately became the JOBS Act began in 2010 as the co-founder of a nonprofit called the Sustainable Economies Law Center (SELC). Janelle Orsi and I founded SELC to provide legal support for the movement to create a transition to a healthy, sustainable, and just economy. One of the areas that we decided to attack was the securities law that makes it challenging for regular folks to invest in the ventures they believe in.

In the summer of 2010, I worked with law student interns to draft and submit a formal petition to the Securities and Exchange Commission (SEC) requesting the creation of a crowdfunding exemption from the onerous registration requirements for public securities offerings.[1]

Our original petition garnered media coverage and letters of support from all over the country, yet we heard nothing from the SEC. But a White House staffer was intrigued by the idea when we presented it to the SEC’s annual Forum on Small Business Capital Formation. Congressional hearings and a Presidential proposal for a crowdfunding exemption followed, and after some major changes to the original proposal, the final legislation – the JOBS Act – was signed into law on April 5, 2012.[2] I was there in the rose garden to watch the President sign it.

The legislation gave the SEC 270 days to complete a rulemaking process so that the crowdfunding exemption could go into effect. Three and a half years later, the rules have finally been released and would-be investment crowdfunding portals will begin submitting applications to the SEC and FINRA in January. Investment opportunities will begin to be listed sometime in 2016.

Something interesting happened to me between 2010 and today. I got tired of waiting for the SEC so I identified and implemented legal strategies that allowed my clients to achieve the exact same thing that the JOBS Act allows (public offering of investment opportunities allowing an unlimited number of both accredited and unaccredited investors). The overarching term for these strategies is the Direct Public Offering (DPO). Using DPOs, I have helped multiple social enterprises all over the country raise hundreds of thousands to millions of dollars.

Here is a list of some of my clients that have currently open investment opportunities that are open to all investors – both accredited and unaccredited. The minimum investment amount is usually $1,000. These offerings are only available to residents of certain states, shown next to their names below.

Once I started researching DPOs, I learned that it is actually not a new model. Ben and Jerry’s completed a DPO in 1984 to open their first production facility. For some reason, after all these years, many people don’t realize that it has been legal all along to do an investment crowdfunding campaign!

So, was it a waste of time to create a new crowdfunding exemption given that DPOs which have been legal for decades already allow investment crowdfunding?

I’m not sure what the answer is to that question but it is true that the new crowdfunding exemption introduces some things that were not previously possible under existing law. For example, the new rules make it possible to accept investors from all 50 states without having to do state by state compliance.[3] Also, for the first time there will be online investment platforms open to everyone that need not be licensed as broker-dealers. The crowdfunding exemption is a new and unique tool in the tool box that is already quite full of tools.

So how do you decide whether to use a DPO or the new crowdfunding rules?[4] It will be difficult to answer this question until there are some actual platforms available for conducting a raise under the new rules. Once there are platforms open for business you’ll be able to evaluate pricing, user friendliness, etc.

Here is a generalized comparison between the two options:

If you’re interested in exploring your options for conducting a public offering of securities, please feel free to contact us.

[1] The most commonly used legal compliance strategies for raising capital require investors to be “accredited” – having a minimum $1 million net worth or $200,000 in annual income. Offerings that are open to an unlimited number of unaccredited investors and involve public advertising generally require registration.

[2] The JOBS Act actually included several reforms to the securities laws in addition to the crowdfunding exemption.

[3] There is one type of DPO that also allows this (known as Regulation A+) but it requires a relatively onerous process with the SEC.

[4] I actually consider an offering under the new crowdfunding rules to be a type of DPO, but I’m making this distinction between the two for the sake of clarity. My definition of a DPO is any securities offering that can be made doing public advertising and is open to an unlimited number of both accredited and unaccredited investors.